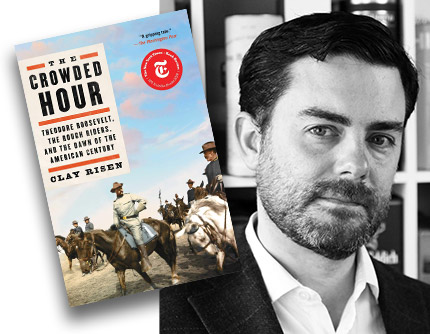 When America declared war on Spain in 1898, the U.S. Army had just 26,000 men, spread around the country – hardly an army at all. In desperation, the Rough Riders were born. A unique group of volunteers, ranging from Ivy League athletes to Arizona cowboys and led by Theodore Roosevelt, they helped secure victory in Cuba in a series of gripping, bloody fights across the island. Roosevelt called their charge in the Battle of San Juan Hill his “crowded hour” – a turning point in his life, one that led directly to the White House. “The instant I received the order,” wrote Roosevelt, “I sprang on my horse and then my ‘crowded hour’ began.” As Clay Risen’s new book, The Crowded Hour, reveals, it was a turning point for America as well, uniting the country and ushering in a new era of global power. Risen is also one of America’s leading whiskey experts: he is the author of Single Malt: A Guide to the Whiskies of Scotland and American Whiskey, Bourbon and Rye: A Guide to the Nation’s Favorite Spirit, which has sold over 100,000 copies across two editions.

Would you like to purchase Clay’s book?
Click here to purchase your copy and a small portion of the proceeds will go to Friends of Boca Grande!

BONUS:
Signed bookplates will be available upon request.
Please call the office and let us know if you would like a bookplate by Friday, November 6th.