The Woman’s Hour: The Great Fight To Win The Vote 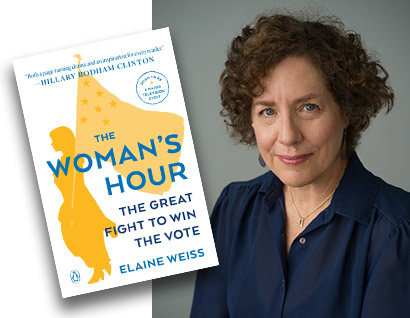 Elaine Weiss is a journalist and author whose work has appeared in The Atlantic, Harper’s, The New York Times and The Christian Science Monitor, as well as in reports and documentaries for National Public Radio and Voice of America. A MacDowell Colony Fellow and Pushcart Prize Editor’s Choice honoree, she is the author of the highly acclaimed narrative non-fiction book, The Woman’s Hour: The Great Fight for the Vote, hailed as a “riveting, nail-biting political thriller” with powerful parallels to today’s political environment. It tells the dramatic story of American women’s seven-decade struggle to win the ballot as it all came down to a pitched battle in Nashville, Tennessee, to gain the final state needed to ratify the 19th Amendment. There the suffragists confront vicious opposition from politicians, clergy, corporations and racists who didn’t want black women voting. They also face the “Antis” – women who oppose their own enfranchisement, fearing suffrage will bring about the nation’s moral collapse. Following a handful of remarkable women who led their respective forces into battle, The Woman’s Hour is the inspiring story of American women fighting for freedom, and the book’s themes—voting rights, women’s rights, culture wars and racism – are especially resonant today.

The Woman’s Hour is being adapted for television by Steven Spielberg’s Amblin production company, with Hillary Rodham Clinton serving as executive producer.