The First Salute: The Caribbean, St. Eustatius and the American Revolutionary War 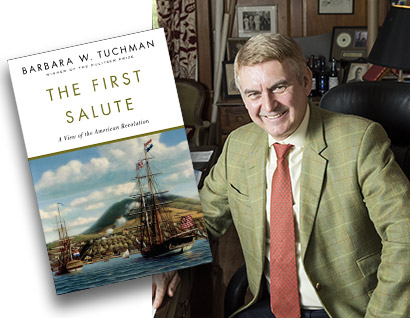 Andrew O’Shaughnessy is Vice President of The Thomas Jefferson Foundation (Monticello), the Saunders Director of the Robert H. Smith International Center for Jefferson Studies and Professor of History at the University of Virginia. He received his undergraduate degree and doctorate from Oxford University. A Fellow of the Royal Historical Society, he is an editor of the Jeffersonian America series published by the University of Virginia Press. O’Shaughnessy will highlight the importance of the Caribbean and naval warfare to the outcome of the Revolutionary War. This talk is based on the title of Barbara Tuchman’s last book, which celebrated the first salute of the American flag by the Dutch island of St. Eustatius in 1776. The island became the main source of vital gunpowder supplies for the patriot cause and was to play a crucial role in the events leading up to the final British defeat at the Battle of Yorktown.