People and Cultures on the Move: Setting the Stage for a Revolution 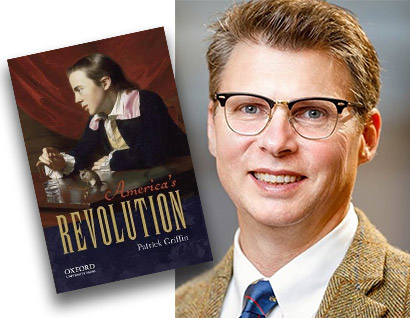 Patrick Griffin is the Madden-Hennebry Professor of History and director of the Keough-Naughton Institute for Irish Studies at the University of Notre Dame. His work explores the intersection of colonial American and early modern Irish and British history; including the movement of peoples and cultures across the Atlantic Ocean, the process of adaptation, colonization and violence, revolution and rebellion, and the ways Ireland, Britain and America were linked and how they differed during the 17th and 18th centuries. Griffin offers a new interpretation and historical synthesis of America’s most formative period. He illustrates how, between 1763 and 1800, Americans moved from one mythic conception of who they were to a very different one, a change that was evident in word and in image. America’s Revolution captures these dynamics by exploring origins and outcomes – as well as the violent, uncertain, and liberating process of revolution – that bridged the two. Following America’s Revolution, Griffin’s most recent book is entitled The Townshend Moment: The Making of Empire and Revolution in the Eighteenth Century, and he is now working on a study of the Age of Revolution.