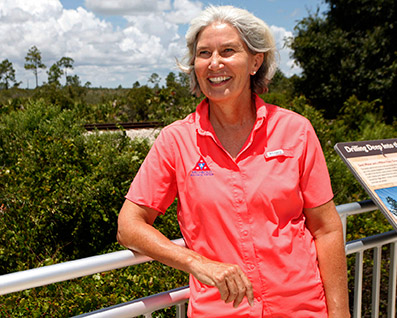 The heart of Florida is a 2.6 million-acre watershed, the Headwaters of the Everglades, stretching from the ancient sands of the Lake Wales Ridge across nearly one million acres of working cattle ranches to the rivers that flow south to Lake Okeechobee, and beyond to the sea. This extraordinary region, home to plants and animals found nowhere else on Earth, also serves as the birthplace of American cattle ranching, dating back in Florida to the arrival of Spanish explorers in the 16th century. For decades, this area has also been home to Archbold Biological Station; an internationally recognized not-for-profit organization dedicated to exceptional scientific research, advances in education, and cutting-edge conservation. Thirty years ago, a partnership between Archbold Biological Station and Buck Island Ranch inspired a new mission: cowboys and scientists working together to advance scientific discovery on a ten thousand acre working cattle ranch. Bridging this scientific and cultural divide has resulted in a series of transformative scientific discoveries. Dr. Hilary Swain will give insight into how these advances have begun to reshape approaches to agriculture, sustainability, and conservation in the 21st century.