Cece Teneal: Portrait of A Queen – Tribute to Aretha Franklin

Friends Pavilion | $35 Livestream | $100 Golf Cart or Lawn Chair Space | $175 Sponsor Space
*spaces include up to 4 people*
PAVILION SPACES ARE FULL – PLEASE CALL THE OFFICE TO BE ADDED TO THE WAIT LIST. 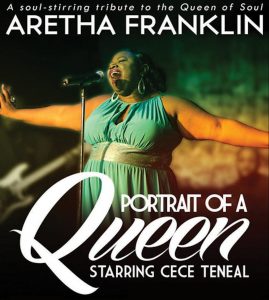 The Queen of Soul – Aretha Franklin taught us how to “Think” and demand “Respect” – while “Ridin’ on the Freeway!”  Portrait of a Queen, featuring the Voice of the Century Cece Teneal, is a dynamic musical production that will have you on the edge of you seats from start-to-finish. This show will energize you with the many life lessons imparted through Aretha Franklin’s 50+ year musical legacy.  An award-winning songstress, Teneal will take music lovers on a trip down memory lane with stellar hits from Aretha Franklin’s musical catalog like: “Chain of Fools,” “Natural Woman,” “Think”, “Bridge Over Troubled Water” and of course “Respect”

In fact, Cece says, “as a child singing along with Aretha’s records taught me how to skillfully use my voice as an instrument, appreciate the art and science of creating a musical experience, and exuding excellence in musicality.” This show is a tasteful tribute that allows Teneal and the band to offer their interpretations of the music made popular by Franklin, who passed away in August 2018. Cece says, “It’s my pleasure to produce a full concert with Aretha’s music. I want to keep giving the people something they can feel!”

CeCe has travelled the world with her talent, gracing the stage before Buddy Guy, Joe Cocker, Johnny Lang, and the legendary B.B. King, to name just a few. Her own original sound has attracted the attention of fans across the globe, and her first music video, “Eleanor Rigby” was exclusively premiered on the Huffington Post. She has been nominated for three Independent Music Awards and claimed the title for 2011 Best Gospel Song (“I Heard you Praying”) and Best R&B Album. Her other accolades include the 2015 Touch the Mic “Muse” Award, and 2017 Orlando Legacy Award. After touring as the leading lady for B.B. King’s Blues Club musical production on board Holland America Cruise Lines, CeCe produced and performed this tribute to Aretha Franklin entitled “Portrait of a Queen”.